The urgency of the phone call Tammy Bertrand, director of the Wesleyan Senior Living Foundation at Wesleyan Village, received in early spring was heart-breaking.

Bill McFadden, a retired minister who serves on the Wesleyan Foundation Board, was desperately seeking safe havens for Ukrainians who’d arrived in Lorain County after fleeing their beloved homeland that Russian forces were deep in the throes of desecrating.

Would Wesleyan Village, Rev. McFadden wanted to know, be willing to provide shelter to those whose world had been completely shattered?

Her answer: A resounding yes.

“We celebrated Wesleyan Village’s 125th anniversary this year,” Bertrand says. “Our mission has always been to provide a continuum of care to seniors. Opening our hearts and homes to these young families was something we needed and wanted to do, too. I’m so proud of the way our staff pulled together to make it happen.”

Bertrand and her team filled patio homes and apartments with furniture donated by families of former residents; stocked refrigerators with nutritious meals; purchased new towels, sheets and pillowcases; and created a banner welcoming the newcomers in their native language. Good Knights, a nonprofit based in Amherst, built beds tailor-made for the children.

She’s also grateful for the support Wesleyan Village is receiving from Lorain County organizations that include LC4Ukraine, made up of individuals and groups that have banded together to provide necessities for those seeking asylum; and the Latino-based advocacy organization El Centro, that hosts Information Days designed to help Ukrainians gain access to translators, health care, food stamps and other services they need. 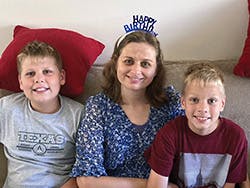 • Olga Loiko and her sons Arsenii, 13, and Mykhailo, 11, arrived in April. Olga and her husband Roma married in 2008. Six months later, Roma was diagnosed with brain cancer, and lost his fight two years later. Olga had a job as an office manager at a realty company, and the family lived a fulfilling life until the war started, and a pastor from her church pounded on the front door. Olga and her children had 20 minutes to pack one bag and board a bus to Poland. The Loikos spent six weeks living in a tent city there before obtaining an emergency visa which allowed them to head for America. Olga volunteers at Wesleyan Village 30 hours a week. 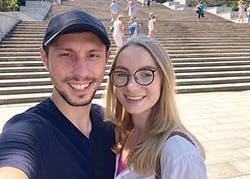 • Oleg and Valentyna Tiurkin lived and worked in Mariupol. Oleg, a videographer by trade, and Valentyna, who worked in retail, never imagined they’d one day have to leave all they love behind. As the first bombs fell, they drove west, passing city after city in ruins and praying they would survive. The couple stayed with friends in Germany for several weeks before learning the United States was accepting refugees. 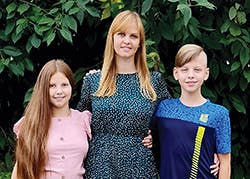 • Natalia Glotova and her children David, 14, and Anastasia, 11, continue to reel from a nightmare they never dreamed possible. The trio arrived in Lorain County this summer, and have made a patio home at Wesleyan Meadows in Sheffield Village. Natalia’s husband and David and Anastasia’s father, Rusian, stayed behind to fight for their country. “I could not imagine that I would receive so much help and support, material and morale,” Natalia says. “I don’t know what the future holds for us, but I want you to know that your help is invaluable. You bring light and fight evil in your own way. I thank God and pray for you.”