Life in the Time of COVID-19

As of late May, there were 41 deaths in Lorain County attributed to COVID-19, with 34 of those occurring in people over age 70. We are also facing soaring unemployment and an unknown future. Although there’s been a great deal of debate regarding the best way to navigate this pandemic, one thing is for certain — life has been drastically changed for each and every one of us. To see how, we checked in with people who are both visible on the front lines and working hard behind the scenes. Here are their stories. 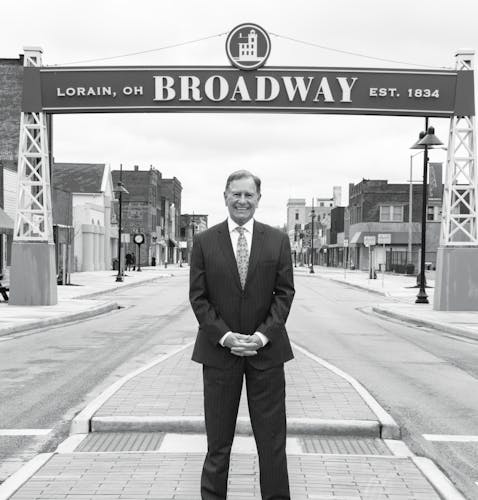 Bradley was just a few months into his term when COVID-19 hit. He had been thinking about water rates (which he successfully reduced by $16 per household) and the lakefront (a revamped marina, restaurant and a new hotel) when the city — and the world — shut down. “Everything was looking really promising for spring and summer,” he says.

Employment on Hold: Bradley was in the process of negotiating a summer jobs program that would have brought in 100 teens and college-aged students to work in various city departments. “We would have had young people in the parks working with kids every day,” he says.

The Situation in Lorain: “Mercy Medical Center is doing very well. They’ve been proactive and have had good results. They’ve not been overwhelmed and have kept the hospital running and safe.”

The Economic Impact: “We’re not exactly sure, but it’s going to be significant.” Bradley adds that the city has received a $725,000 community development block grant from the U.S. Department of Housing and Urban Development to be used to fund the response to the virus.

Quick Response: “The first case in Lorain County was a policeman from the city of Lorain. Luckily, he recovered. That caused me to close city hall and start screening people and taking temperatures and things like that. We were put on our guard early.”

Credit to City Workers: “Our police and fire department and all the city departments have given 110 percent.”

More Credit Due: Bradley says he asked unions operating in the city to put a freeze on all negotiations because of the virus — and they agreed. “They’ve been more than helpful,” he says.

What He Misses Most: Taking his 6-year-old granddaughter for walks, bike rides or on other adventures. “I’m really looking forward to doing those things with her again.”

The Bottom Line: “We can’t let our guard down and start going back to the normal way we get together in the summertime. We have to protect each other.” 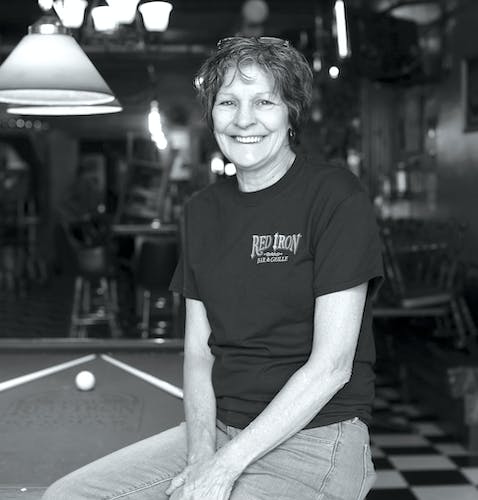 “People have been awesome to us,” says Sutton, while stirring a batch of broccoli cheddar soup. “Our takeout has been phenomenal.”

Even so, it has been a struggle to pay the rent. Many of her employees are taking off because they’re afraid of getting sick. And Sutton doesn’t know if reopening will even be worth it given the reduced number of guests she’s able to serve.

“I just don’t know. It’s crazy,” she says. “How do you stop someone who’s had a couple beers from going right up to a friend and saying hi?”

Still, she says she’s so grateful for her customers. Not only are they buying takeout — especially wings, like never before — they’re partnering with Sutton to donate money to cover meals for first responders. “I’m totally impressed with how people have supported us,” she says. 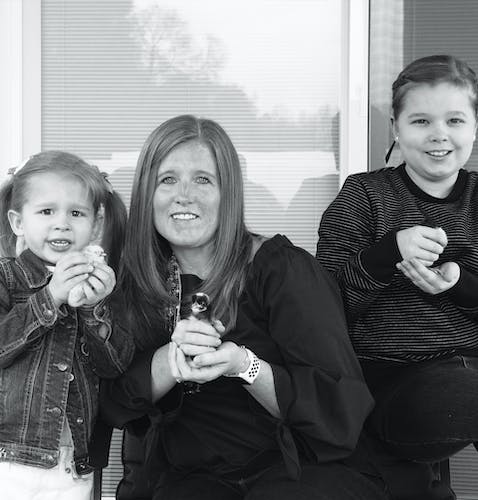 Everyone looks forward to spring at Saint Mary, which was the first school in Lorain County to receive a STEM Designation by the Ohio Department of Education. That’s because instead of reading about life cycles in a textbook, Rospert brings the lessons to life.

Critters in the Classroom: Rospert and her third graders have hatched ducks, praying mantises and ladybugs — right in the classroom. “They all come into the school year wondering what we’re hatching or growing,” Rospert says.

This Spring: The plan was to hatch chickens. “When all of this went down, my students all wondered what we were going to do about the hatching. The wind was knocked out of their sails.”

Plan B: Rospert ordered the chicken eggs anyway, hopeful that the school year would resume in May. They incubated in her basement and began hatching on May 5.

Connected: Rospert installed a webcam to allow her students to watch the chicks hatch. She also live-streamed candling sessions to check the eggs for life.

Double Duty: In addition to her teaching duties, Rospert has two school-aged daughters. “It’s hard to balance,” she says. “I do think this time has given me an opportunity to reset my priorities both with my family and in the classroom. Some of the things I used to stress about … maybe some of those things are not so important.”

Her Strategy: “I just try to remember that I’m not trying to replicate school. This is a completely different experience. It was hard in the beginning, but we’ve gotten ourselves on a cycle. I teach during the day and, in the evenings, help my kids.”

Online School: “I didn’t get into the teaching field to do it via the computer. I wanted to build those relationships. I really miss that.”

Parents, Just Do Your Best: “As long as we’re keeping them engaged and keeping their minds stimulated. They may not be learning all of the textbook material, but they’re learning life lessons.” 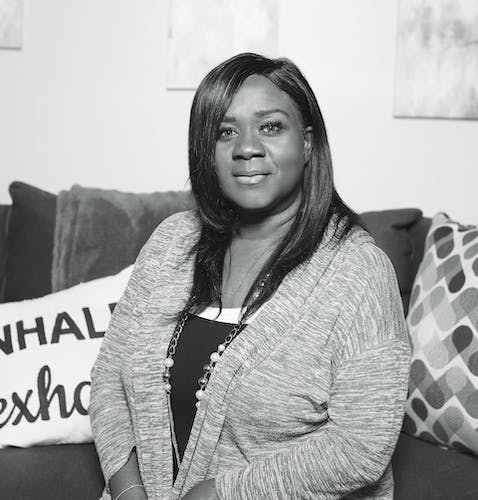 Life is difficult for everyone these days, but it’s especially hard for those who’ve been battling depression and anxiety. “You get them to a place where they’re stable and not on edge,” says Mathis. “All of a sudden, the pandemic hits and you can only imagine what happens. All of that surges right back up.”

Mathis was working three days a week before March but is now up to five full days to accommodate the new clients she’s seeing.

Among them are a handful of health care workers who are struggling with what they’ve experienced. Although they’re certainly used to sickness and death, COVID-19 brought a new kind of trauma. “Families can’t be there, so people are dying alone.”

The strategy she suggests for many of her clients is to focus on the fact that what we’re going through is temporary. “There’s light at the end of this tunnel,” she says. “We won’t always be isolating like this.”

In her own house, she and her family are relying on their faith — and taking stock of their blessings. “More gratitude and more thankfulness,” she says. 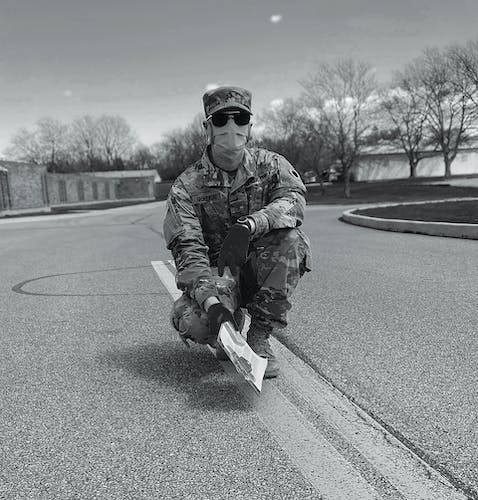 Gonzalez said yes when he got the call.

As a Lorain County native and member of the National Guard, he knew he was in a unique position to serve his community. For much of the spring, he’s been helping the Second Harvest Food Bank of North Central Ohio respond to the increased needs sparked by COVID-19 and the widespread unemployment that followed.

Gonzalez says he joined the National Guard in 2015 because he wanted a major change in his life — and he got it. “It instills discipline,” he says. “It keeps your integrity intact.”

He’s been shocked by the people he meets while distributing food. “They’re mainly picking up for somebody else,” he says, adding that he’s even seen teachers making the trip for families of their students. “A lot of them donate food or make cash donations at the same time. There’s so many selfless people. That’s heartwarming to see.”

Second Harvest has more than doubled its distribution (2.1 million pounds) since the pandemic began. President and CEO Julie Chase-Morefield anticipates demand to stay steady for at least the next year as the economy struggles to recover. Donations can be made to the food bank at bit.ly/donate-shfb. 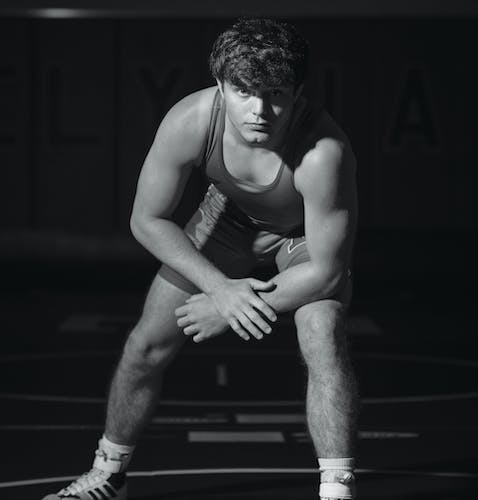 Shawver was about to board the bus to travel to the Division I state tournament in Columbus when he got the news: The tournament was postponed due to COVID-19. A few weeks later, the tournament was canceled, crushing the 18-year-old’s last chance to realize his childhood dream.

His Second Chance: “I was projected to win it this year.”

Not Alone: The Elyria Catholic High School girls basketball team was in Columbus, about to check into a hotel, when the Ohio High School Athletic Association announced all state tournaments were “postponed indefinitely.”

Shawver’s Team: Elyria High School’s wrestling team was ranked 10th in the nation and had nine students slated to compete at states, including the head coach’s son, Mick Burnett, who took first place last year in the 132-pound weight class and was projected to win again.

Life on the Mat: “I used to go and watch states every year with Mick. We thought, ‘That will be us someday.’”

Looking Forward: Head wrestling coach Erik Burnett tried to soften the blow. “He knew he couldn’t control any of our emotions,” Shawver says. “He just told us we had bigger things ahead now since we’re going to college.”

A Scarlet Knight: Shawver, who was contacted by nearly 30 colleges, chose Rutgers University.

Grateful: “Wrestling definitely built me into the person I am today. Without Elyria wrestling or my coaches, I would be different. It made me more responsible, more respectful to other people.” 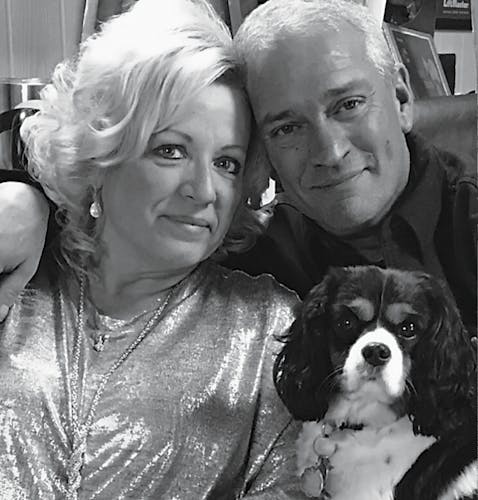 Mitch and Diane have very different occupations, but they were united in their approach to COVID-19. Given how many people they both come into contact with every day, they decided in early March to keep each other safe by sleeping in separate rooms and staying apart. The following month was far more stressful than either of them could have imagined.

Isolated: “We came no closer than 10 feet to each other,” Mitch says. “After 35 years of marriage, it totally messed me up. I’m used to going home and kissing my wife. You know what that did to me psychologically? I couldn’t go near my wife. We were technically dangerous to each other.”

Enough!: One day in mid-April, Diane looked across the room at Mitch. “I can’t do this anymore,” Diane said.

A New Mentality: “By God, we’re going to face this challenge,” Mitch says. “We decided not to be afraid.”

His Work: “My service continues to stay pretty steady, but everything else did not,” says Mitch. “New installations were down 80 percent. No one is spending a dime.”

Her Work: “We’ve all had to be very cautious,” Diane says. “I haven’t come into contact with any patients that I’m aware of who have COVID, but everybody is always masked.”

Facebook Live: Mitch hosts a Facebook Live show every morning featuring great music and his thoughts on how the pandemic is affecting local businesses and the economy at large. “How long can we continue to stay shut up?” he asks.

Keeping On: Although business has been tough, Mitch is determined. “This is my life. I’m not going to quit.”

*Citing concerns about being misrepresented by the media, Diane Witherell’s manager asked that she not release the name of the hospital at which she works. 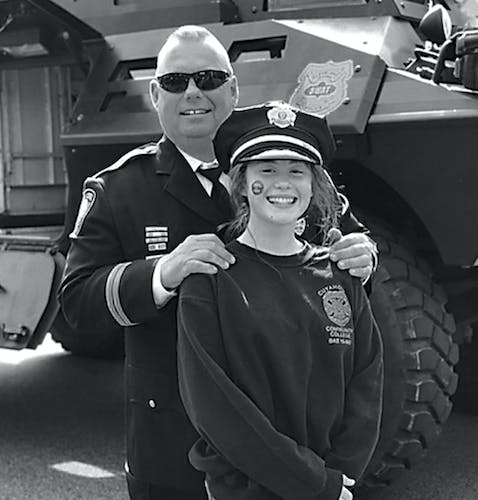 It was mid-March when Bockelman developed a cough and a fever. After his symptoms didn’t go away for a few days, he went to Cleveland Clinic’s Avon campus to be tested and learned he had COVID-19.

“I don’t know where I got it from,” he says. “I’m not aware of anyone I had contact with who had it, and I didn’t visit anywhere in particular.”

Bockelman felt sick for a total of about two weeks and managed to get by at home with Tylenol and cough medicine. “It never really hit me hard enough to where I had breathing problems,” he says. “Everyone has their own unique symptoms, and I would say mine was like a prolonged cold or flu.”

As for his department, where Bockelman is back at work as acting chief, he says that call volume is slightly lower than normal.

It’s not yet known how if or how long someone who has had COVID-19 will have immunity from the virus, so Bockelman is still taking all the recommended precautions, like wearing a mask. “I really don’t know about immunity,” he says. “But I’m hoping.”