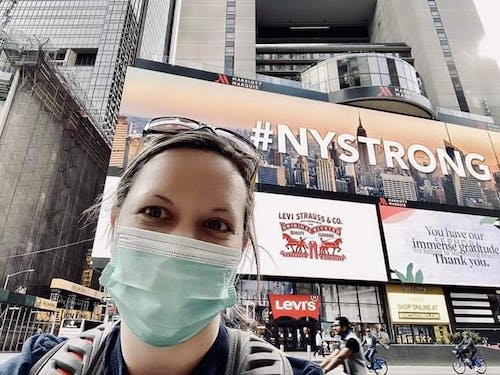 Adrienne Gray thought she would never be able to ride in an ambulance again.

Less than a year ago, she lost her 11-year-old son in an instant and, although she’s a trained nurse and paramedic, there was nothing she — or anyone — could do to help him. “When I was in the ambulance,” she says, “all I wanted to do was to switch places with him.”

After Gage died, she knew that she eventually had to return to her old life but didn’t know if she could. Gray, who lives in Litchfield, built a career as both an emergency medical services instructor at Lorain County Community College and as a volunteer paramedic/firefighter in Medina County.

“My biggest fear was that I would have anxiety in the ambulance,” she says. “I debated not doing patient care anymore.”

When she felt like giving up, she always returned to the same thought: “I had to decide that I’m here. I’m still here. What can I do with my life to make it meaningful?”

The answer came to her when COVID-19 began to sweep through the United States. She applied to work as a nurse in New York City and, within two weeks, found herself at the USTA Billie Jean King National Tennis Center, which had been converted into a field hospital.

Gray stayed at a hotel near the airport with both other medical staff and homeless people who had tested positive and had nowhere else to go.

Her days began at 5:10 a.m., when she had to catch the bus to the field hospital, and did not end until she returned back at 7 p.m. Except for one short break, she was required to wear a mask the entire time. “In my career, I’ve never worn an N95 mask for 12 hours,” she says. “You get nauseous. You don’t feel well.” 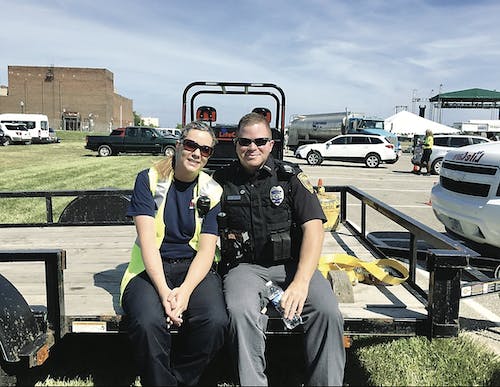 Even worse, much of the personal protective equipment was taken off at the end of the day, sprayed with Lysol and reused the next day.

Still, morale was good because the mission was shared. “We all [went] there for a reason,” Gray says. “We came to help people.”

Ultimately, the worst fears for New York City were never realized and the tennis center only saw about 50 patients. Gray’s contract was scaled back from six weeks to four, which included a two-week quarantine upon returning to Ohio.

But what Gray saw will always stay with her.

“I had a patient who was mostly palliative care,” she says. “She couldn’t speak English and couldn’t see her family. She would just hold my hand and hold onto it really tight. We assigned a person to sit with her. We didn’t want her to die alone.”

Then there was the patient who had made a good recovery. She was getting ready to return home when she learned that her husband had become very sick and was put on a ventilator. “She couldn’t go see him,” Gray says. “All she would get were phone updates.”

The hours were long, and the work was uncomfortable, but Gray knows she was able to make a difference.

“All of the patients were memorable, and they were all incredibly grateful to us,” Gray continues. “They were basically stuck in a tennis stadium with no TV and no visitors.”

Gray returned home in early May, worried about what she was bringing with her. “I just felt like I was carrying the virus back to Ohio,” she says.

During the early part of her two-week quarantine, she developed a cough, but ended up testing negative for COVID-19. “You almost kind of wonder how I did not get the virus,” she says.

Her husband, Jeremy Gray, a Lorain Police Department detective, quarantined with her. After what she went through in New York, two weeks of Netflix and time with her animals were just what she needed. When she returns to the classroom at LCCC, she’s looking forward to sharing what she learned with her students.

As for her opinion on our country’s recovery, Gray isn’t getting into it. 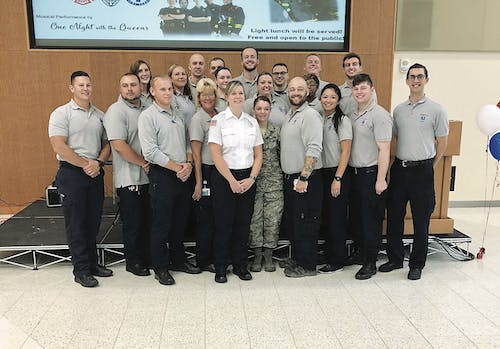 “I’m not an economist. I have no idea,” she says. “I have not been personally affected by it, and I don’t think I have any right to comment on it. I don’t know what it’s like to lose my job and have to worry about my next paycheck.”

As they approach one year without Gage, she and her husband continue to heal. They learned that he was born with a condition that caused an artery and vein to intertwine in his brain. There were no symptoms until it ruptured, causing a massive brain bleed.

Gray knows she’ll never be the same. “It changed everything about my life,” she says. But she also feels an obligation to make the most out of her days — and to draw on her pain to help heal others.

“I’ve probably seen the worst thing I’m ever going to see,” she says. “And I think it makes me stronger.”