A vision to bring a historic building alive again has driven the transformation of Amherst’s old Central Middle School at 474 Church St. into a lively site. Sprenger Health Care Systems purchased the building in 1987 — the school had been vacant since 1984, standing with promise but no activity in the town center behind Amherst’s fire station.

That is, until Sprenger spearheaded a significant transition that is resulting in 40 airy apartments in a licensed residential care facility that will connect to Central Village, a 36-apartment independent living community Sprenger opened in 1990 on the school property.

Dubbed the 1907, the space’s old gymnasium is now a dining room anchored by the school’s old stage. A second-floor walking track will offer residents a way to get their steps in without leaving the building. Tall ceilings and vast windows give the 1907 at Central School the type of character you simply can’t find in new construction, says Medina Gonzalez, executive director of the building. For instance, much of the original floor was kept intact and refinished.

“My office will be the old principal’s office,” she says, remarking that there’s a cool factor to bringing an interesting old space to life. “The nice thing is, the Sprengers kept the strong history of the building — if there was something inside they could save, they saved it. It’s a fascinating building.”

The 1907 has a captivating history as a sandstone structure built to replace the original Central Middle School, which opened in 1849 and burnt to the ground in 1893. Fourteen years later, the second school building opened—in March of 1907. “There was a second fire in the school, but it did immediately reopen in 1908,” Gonzalez says.

For most Lorain County residents, the school has always been “closed.”

Reconstructing the interior and repurposing it to serve as an independent living community fills a gap for this type of housing, says Jason Coe, director of operations at Sprenger’s other new venture, Silver Maple Recovery in Lorain, a drug addiction recovery center that opened in April at the former Lost Nation Sports Park West site.

This, too, fulfills a demand, with Ohio third in the country in 2018 for overdose deaths due to opioids. “We saw a real need,” Coe says, relating that Sprenger Health met with the Lorain County Alcohol and Drug Addiction Services Board a couple years ago. “They said they were struggling with a bottleneck, and we started looking at the possibility of providing those services. We found a great location in Lorain County and we now offer inpatient, acute detox and outpatient programs with a staff that can admit 24/7 and has an average counseling tenure of 24 years.”

FULFILLING A DEMAND FOR CARE

Sprenger's long-term strategy involves expanding its footprint through acquisition. In the senior living sector, the company operates 13 communities including 2,000 beds in Ohio, Indiana and South Carolina. In Lorain County, Sprenger employs about 1,000 people in its seven buildings, Coe says. That number will grow with the opening of the 1907 in Amherst and Silver Maple Recovery in Lorain.

Tony Gallo, president and CEO, Lorain County Chamber of Commerce, says Sprenger is one of the county’s largest private employers — and the company’s interest in revitalizing properties aligns with the chamber’s hope for businesses to invest in existing infrastructure. “During our third annual economic summit in May, one of the takeaways discussed was the importance of repurposing existing buildings,” Gallo says. “Both Sprenger facilities fit that to a tee and hopefully will provide a roadmap for others to use.”

Historic tax credit use helped make the 1907 at Central School project possible, Gallo adds, noting that a project of this scale could feel too unwieldy. “The Sprengers have owned the property and I think always had their sight on redoing it, so it’s exciting to see it happen,” he says.

Meanwhile, a similar scenario of a vacant building being given new purpose occurred at the former soccer academy in Lorain. When Lost Nation Sports Park West opened its facility a decade ago, the concept was fresh and promising, Gallo relates. “It was an out-of-the-box idea, but unfortunately it happened at the height of the economy tanking, so it did not take off,” he says. “Having that investment sit idle for the better part of five to eight years was sad. No one really expected that was the route it was going to go.”

All Pro Freight purchased the property in 2014, and Gallo says, “We assumed it was going to continue in a field house type usage, but then Sprenger Health came up with the idea of a treatment facility, and Lorain County seems to be at the unfortunate forefront of the opioid epidemic.”

The timing was perfect. “Simultaneously, the county was converting the old Golden Acres nursing home into a facility, as well, which would not be private pay like Silver Maple Recovery,” Gallo says.

Silver Maple Recovery reaches a different market — and its transition into the former soccer academy was seamless, Coe says. North Coast Construction renovated the facility, but it already had “an outstanding kitchen that we have our chef working in now,” Coe says. The building already had laundry facilities, rooms for residents and spaces to use as group treatment rooms. “It is a great location for us, and the building was in excellent shape.”

The transformation happened fast. “The structural components of the building were in great shape — we just had to adjust some walls, put in new flooring, wall coverings, furniture and paint,” Coe says. Sprenger Health Care Systems took possession of the property in October 2018 and immediately started construction. “The county and city were great in terms of cooperating with our plans and approving everything quickly,” Coe says.

Construction completed in early March, and in the first few weeks of its opening in April, Silver Maple Recovery had a half-dozen admissions. “We continue to grow,” Coe says, relating in May that the staff reviews about seven referrals per week.

Currently, Silver Maple Recovery can house 41 male clients, and next year Sprenger hopes to add a female wing to the campus, Coe says. Access to the facility is convenient, with its location on state Route 58 off Interstate 90, a few miles away from Mercy Health. “We have seen an increased need for addiction treatment, and there was a lack of services in Lorain County, particularly in the areas of detox and residential programs for men,” Coe relates.

With 25 full-time employees, the staff will expand as Silver Maple Recovery’s census builds, Coe says. “We have an experienced team,” he adds.

Gallo points out that Silver Maple Recovery’s career opportunities include well-paying positions, an asset for Lorain County. “These are highly qualified professionals,” he says.

Sprenger’s independent living project, the 1907, will create caregiving job opportunities, from nursing to dietary assistants to activities coordinators, Gonzalez says. “We have to hire for the entire building,” she says. 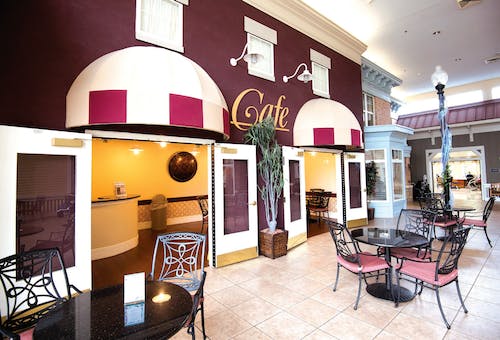 COMMITTED TO THE COMMUNITY

Beyond the development Sprenger Health Care Systems has invested in to repurpose two of the county’s landmark buildings — one a historic site, the other a modern concept — the organization is committed to making a positive impact on the region through community sponsorships and good works. Not only does Sprenger Health offer volunteer opportunities, it sends volunteers out to assist in a range of capacities.

Coe shares that the third-generation family business donated its former Lorain Manor building to the LCADA Way for it to open the Key Women’s Center. Sprenger Health moved those licensed beds to Avon Lake Towne Center.

Gonzalez is a board member of the Amherst Historical Society, volunteers with the schools and is a member of Main Street Amherst.

Not to mention, serving as a longtime county employer benefits hundreds of local families. Gonzalez has been with the organization for 19 years, beginning as a State Tested Nursing Assistant (STNA) and advancing to an activity director, assisted living manager and now executive director of the 1907 at Central School.

This year, Sprenger Health Care Systems celebrates its 60th birthday in the community. Founded by Grace Sprenger in 1959 when she opened Amherst Manor Retirement Community, the company is now operated by the third generation, Nicole Sprenger, CEO, and Michael Sprenger, COO, with its headquarters on Oberlin Avenue in Lorain.

For more information on Silver Maple Recovery in Lorain, click to visit silvermaplerecovery.com.