While her friends were glued to the Cartoon Network, 5-year-old DaShonda Smith and her grandmother avidly watched the Food Network. The pair admired the culinary artistry of the shows hosted by Paula Deen, Emeril Lagasse and Rachael Ray, and were captivated by the baking segments.

“It fascinated me to see how you could take such small ingredients like flour, sugar, eggs, water and vanilla and transform them into a cake, cobbler or crumble,” Smith, 27, recalls. “I thought, ‘Wow, this is great. I have to try this,’”

The youngster readily shared her homemade treats — ranging from artfully iced cupcakes stuffed with cream cheese to chocolate-covered pretzels and strawberries — with eager classmates. By the time she was a teenager, Smith had learned the nuances of cooking vegetables from her mom and graduated to making dinners that were ready when her parents returned home from work. Her specialties included pasta dishes and citrus thyme chicken, as well as a mean alfredo sauce made from scratch with heavy whipping cream. It didn’t take long for her to upgrade to being in charge of cooking her family’s Thanksgiving and Christmas feasts.

“It gave me a sense of knowing that they supported what I did — and loved the food itself,” she says. “Each was a home-cooked meal always made with love and a sprinkle of Jesus.”

That mantra is clearly in evidence at Dishes by DaShonda, the restaurant she opened last September in Lorain.

Smith, who hails from Delaware, Ohio, received a scholarship to Kent State University and moved north with the intention of earning a bachelor’s degree in dance. But fate had other plans. After being sidelined with an injury, she began cooking at home for friends and neighbors. They urged her to take her talents seriously and open her own restaurant.

The eatery features a tempting menu available for dine-in, carryout or delivery. Smith’s parents, sisters and grandmother lend a hand to make sure everything runs smoothly. The bill of fare, which the owner describes as “meals for the soul,” changes weekly and includes generous portions of African American, Mexican and Caribbean favorites.

“I love seeing my customers walk away with what they love the most,” she says.

The Smith family also plans,
caters and finds venues for special events that include themed bridal
and baby showers.

“My mom loves decorating, and I also fell in love with the matchy themes and bringing people’s visions to life,” she says.

Although the restaurateur loves where life has led her, she hasn’t abandoned her ardor for dance or the goal of earning a bachelor’s degree in the subject from Kent State University.

“I want to someday be able to teach kids how to find their passion,” she says. “With cooking and dance under my belt, it might be both.” 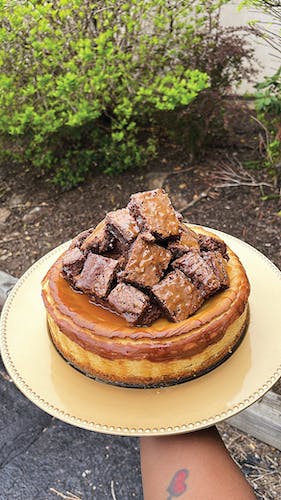 Southern Fried Catfish: DaShonda Smith estimates that not a day goes by when at least 10 people don’t ask for this delectable specialty. The secret to its success: Smith’s fresh lemon-pepper seasoning. “Many cooks don’t use that in catfish,” she says. “But I believe the lemon gives the fish a special burst of freshness. We also fry the fish in a cornmeal and flour mixture so it’s crispy and crunchy on the outside, but still soft and tender on the inside.”

Birria Tacos: The mouthwatering tortilla is comprised of a corn shell taco stuffed with quesadilla cheese and slow-cooked beef or chicken. The secret to its success: Authentic Mexican chiles. “We make them with Guajillo chilies, which is a level 4 spice on a scale of 5. It gives the Birria a kick of flavor and heat, which is so delicious because it is seasoned to a T.”

Caramel Brownie-Loaded Cheesecake: This irresistible dessert is oven-baked for 45 minutes before being topped with a whole pan of milk chocolate brownies and drenched in caramel sauce. The secret to its success: “When you take a bite, you get a bite of everything. It’s like a party in your mouth.”