Ever since we watched them roll into our neighborhoods and downtown streets, food trucks have owned us. Our heads turn. Our stomachs growl. And, no matter how long the line, we’re there knowing it’s worth the wait.

Food trucks are a reason for celebration. Just ask Shontae Jackson, chef/owner of Steel Magnolia Food Truck and Catering. Jackson put in the effort to get her truck. From a young age, she wanted to own a restaurant.

“My mother signed my work permit so that I could get a job at Kendal (at Oberlin) when I was 14,” she says.

After high school she spent seven years at Mercy Health working as a nutritional coordinator managing a staff of 15, helping the cooking line, monitoring trays and matching patients’ food with their dietary restrictions.

Jackson never lost sight of her dream. Recognizing the need for a formal education, she registered in the culinary arts program at Lorain County Community College.

“I took some time off to be a mom but went back to school,” she says. That’s when her energy kicked in.

Jackson returned to Kendal at Oberlin. This time, she was a specialty chef. “I piloted a program based on using previously prepared food and preventing waste. I’d add different flavors and create new items.” The residents loved it. They were excited about the introduction of crab rangoon, watermelon and prosciutto-wrapped asparagus, shepherd’s pie with beef tenderloin and leg of lamb gyros.

Jackson began attending seminars conducted by the NEO LaunchNET to learn to operate a business. At one session, she struck up a conversation with Lee Kolz, past director of NEO LaunchNET. A former attorney, Kolz mentioned that a coworker was friendly with Matthew Dooley, the owner of a food truck that was sitting idle. Jackson saw her opportunity.

“When I saw the truck, I fell in love. It was shiny and new. Everything worked.” Well, almost everything. In addition to helping her learn the ropes of operating the truck, Dooley also repaired a frozen pipe.

With financial help from family and friends, she was in business.

“So many people helped me every step of the way,” she says. “They helped me with my dream. People believed in my story.”

Word of Jackson’s internationally inspired cuisine spread quickly. She began catering private events and launched the food truck program at Oberlin College. She continues to gain support from Lorain County Community College while also working some campus events. On the Rocks, a climbing facility in Amherst, invited her to bring her food truck to the facility, and she participated in the Elyria Home and Garden Show and the Huron Herb Fest. 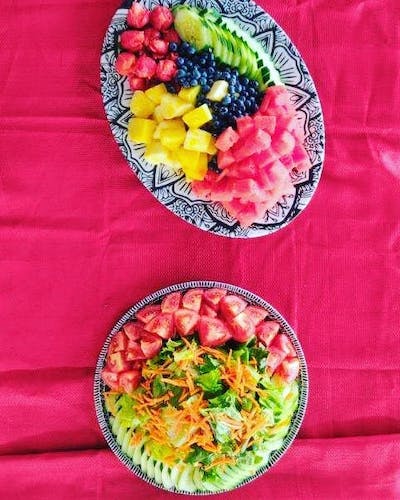 Now, the mother of three says her children marvel at her success. “For my children to see how this happened and how windows opened for me is the best.” Jackson’s 17-year-old daughter and mother work with her on the truck. Her 13-year-old son works in the kitchen. And, her 7-year-old son washes vegetables. “He’s the boss,” she says.

As for the restaurant? Stay tuned. “It will probably happen within five years. I want the plates, the beautiful surroundings. I can’t do that on a truck.”

“I’m always inspired,” she adds. That remains her inspiration.