From plexiglass shields to curbside takeout, COVID-19 has changed everything in terms of how we shop, eat and dine out.

For local grocers, that means much longer hours and a constant threat to their own safety. For restaurant owners, it means a quick change in how they do business — and a massive blow to their finances.

Ron Larson is the owner of four Avon businesses that serve food — Strip Steakhouse, the Tree House Gallery and Tea Room, the Clifton Barn event venue, and Chez Michel French Market. He’s had to furlough 55 people — and has lost $15,000 in meat he ordered before the shutdown.

In late April, he sat alone at the bar in Strip, where he’s the head chef, and watched Gov. Mike DeWine announce plans to reopen Ohio. “He gave me no direction as a restaurant owner,” Larson says. “Our business model is not for takeout. “I am just eroding away savings and a foundation that we established throughout our lives. You just watch it go away.”

Despite his uncertain position, Larson has prepared and donated meals to Cleveland Clinic (both the Avon and the main campus) and local police departments. “There are heroes out there,” he says.

Business is thriving at local grocery stores, but it comes at a high personal cost.

Ben Fligner, owner of Fligner’s Market in Lorain, was about to make a run to drop off toilet paper he was donating to the Boys and Girls Clubs of Lorain County when he took a moment to describe how his business has changed. “I feel like myself and my employees are all first responders,” he says. “They’re working their butts off showing up and taking care of people. It’s been stressful, but it’s really pulled people together.”

Fligner provides masks and gloves to his employees and was also one of the first stores in the area to install plexiglass shields. He limits his store to 25 customers at a time and has 6-foot social distancing lines marked throughout his store.

Because he relies on local farmers for his meat, he says he’s avoided some shortages that other grocers might face. “This is a perfect example of why it’s good to support local suppliers,” he says. “That’s what takes you through times like this.” 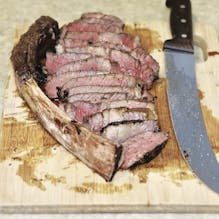 Things are much the same at the Oberlin IGA, where owner Leo Braido says he is now working at least 80 hours a week. There have been periodic shortages of items like toilet paper, but Braido says his shelves are full. The difference is that many food manufacturers have streamlined their product offerings. “Demand has been unprecedented,” he says. “Less variety allows them to keep up with increased demand.” 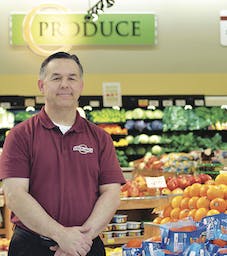 Braido says growing up “very poor” has given him a lifelong compassion for those in need and that he helps as much as he can, including a recent donation of a large amount of meat to Oberlin Community Services.

Fligner, who serves on several local boards in Lorain County, is looking beyond COVID-19 to what lies ahead. “I just hope that all the local businesses come out of this ok,” he says. “I’d like to see the restaurants open up and be successful. I know in Lorain, we were turning a corner. I just hope we can keep that going when this is over.”