Joan Perch is beyond excited. She just received notification that she’s been awarded the 2020 Ohio Governor’s Award presented by the Ohio Arts Council for Community Development and Participation. Based on her involvement in both the Cleveland and Lorain County art scenes, this should not have come as a surprise.

A fast-talking tour de force when it comes to building communities through the arts, Perch is known as a co-founder of Cleveland’s Sparx City Hop. Five years ago, she introduced — and continues to champion — Lorain County’s FireFish Festival.

“It’s all about creative placemaking. When the arts are infused, we have a richer, better community,” she says. Live and work, live and play, live and stay is her mantra.

After taking a sabbatical from Lorain County Community College to create FireFish Festival, Perch, along with other, “connected all of the tools in my toolbox to revitalize Lorain County with the creative arts.”

She visited Providence, Rhode Island, with plans to model the Lorain County event after WaterFire Providence only to discover that the pieces of that puzzle didn’t exactly fit with the community’s vision. Her goal is to highlight places that weren’t in the forefront and create a surrounding sense of momentum and energy. 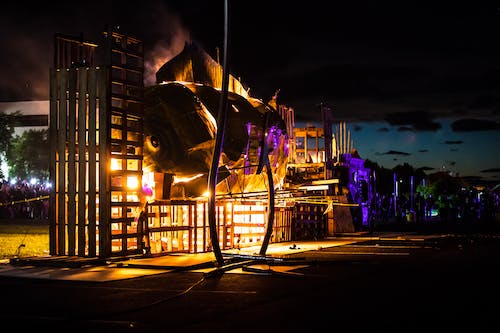 When FireFish Festival became a reality, it was — and still remains — the result of a collaboration of funding by Ohio Arts Council, First Energy, local foundations and businesses and sponsors. The result is the creation of something that she defines as “cool as anywhere that’s happening in Lorain,” Perch says.

FireFish initially showcased from Fourth to Seventh streets, winding into alleys and storefronts and occupying empty banks. It did more than provide entertainment, it fostered energy and incentives for businesses that previously had never considered Lorain County to suddenly put the area on their radar, ultimately making it their home.

“Small businesses that didn’t exist before located here,” Perch says. “Others got excited after the event and were anxious to see what was happening here.”

FireFish became one of the businesses’ biggest draws, introducing new customers and tourists.

Perch began involving neighborhood youth, teaching them to understand the importance and potential that the arts can bring to any neighborhood. She introduced Lorain County Community College students to the impact of technology and the arts, thereby helping to further careers.

In the end, Perch still believes, “It’s all about civic development and the enrichment of the community through the arts.”